Sam’s Club is officially working its way in on the action of the ‘cashier-less’ storefront. Sam’s Club is testing what some are calling an iteration of an Amazon Go store in Dallas, Sam’s Club Now.  The key word here is ‘iteration.’

We think that making this comparison to Amazon Go is a bit misleading since there are some significant fundamental differences in the engagement and shopper experience (based on the most recent press release and description from Sam’s).

The one commonality, as stated, is ‘cashier-less.’ After that, the two are quite dissimilar.

According to CNET, the new Sam’s test store will be an app-driven version of a membership-based Sam’s Club where you can use your phone to set up shopping lists, navigate the store and buy your items. You scan items as you pick them up and check out by having a Sam’s worker scan the code on your phone.

This differs from the ‘Go’ store where the model focuses around simply walking in and out after scanning your App at the store entrance.  There is less shopper friction in the Amazon model.

But as we all know, the store formats are wildly different and thus the consumer experience is also different.  The Amazon Go stores are smaller (around 1,400 to 2,000 square feet) with sizes comparable to that of convenience stores while Sam’s is a much larger store at 32,000 square feet (although still only a quarter of the size of the traditional Sam’s Club store).

Square footage aside, the most important differences are in the shopping occasion and need state which drives the engagement.  Amazon Go is a convenience trip with a small basket while Sam’s Club Now is a club trip with a typically larger basket ring.

While the Sam’s model is not a ‘Just Walk Out’ model like Amazon Go, the Sam’s ‘Mobile-first Shopping Experience’ via the Sam’s Club App has some new key functionality that lends itself to cutting shopper friction and paves the way for a more entertaining experience.  Frictionless and entertaining in a club store trip?  We’re listening! 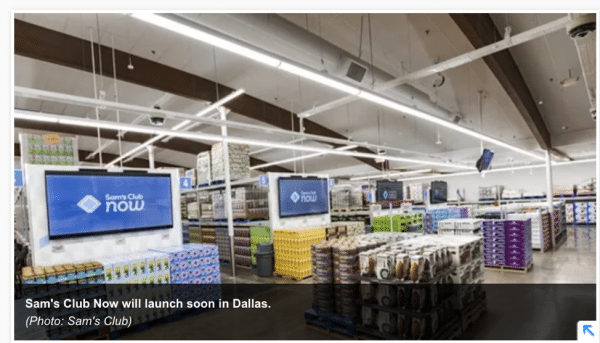 With Sam’s, you still need to scan your items as you pick them up. At the end of the shopping trip, you check out by having a Sam’s employee scan the code on your phone.  This model is an extension of a self-checkout currently used in many stores, except that you ‘scan as you go.’

The additional app features are the key ways in which this model is setting Sam’s Club Now apart and could be entertaining in-store.  This includes:

And finally, according to Jamie Iannone, CEO of Samsclub.com:  “We also have plans to use augmented reality to transform members’ digital carts into pirate ships, Or maybe you’d prefer a rocket? More on that soon!”

Focusing on the use of new technology to make shopping frictionless and fun are keys to success in today’s retail environment and Sam’s seems to be right in the mix.

We can’t wait to experience the new Sam’s Club Now…now!

This site uses Akismet to reduce spam. Learn how your comment data is processed.